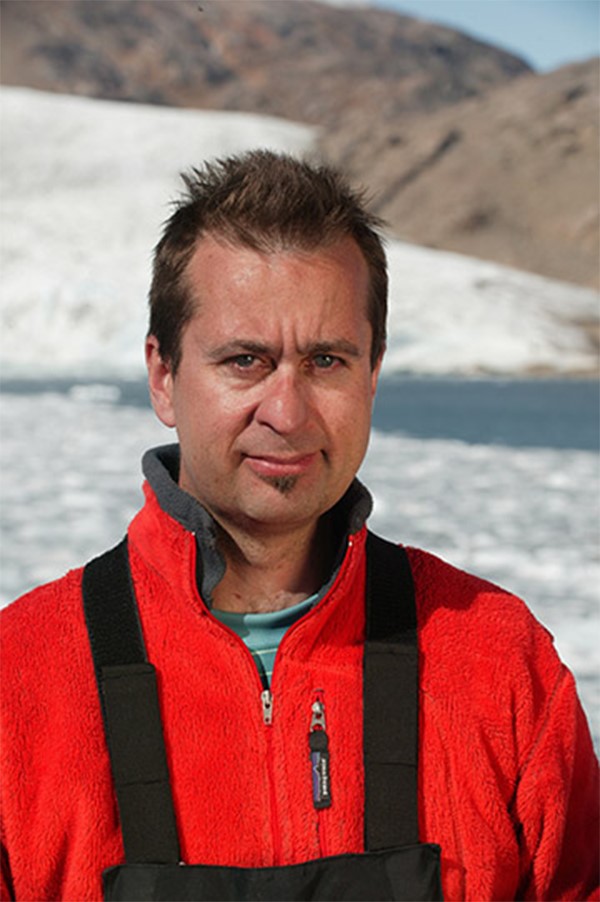 Professor Gordon Hamilton, a long time member of the IGS, died at the age of 50

Remarks presented by Christina Hulbe at the opening of the joint IGS/IASC/CliC Symposium on the Cryosphere in a Changing World in February 2017.

Gordon Stuart Hamilton, Research Associate Professor at the University of Maine, died October 22nd 2016, as the result of an accident in the McMurdo Shear Zone, near Ross Island, Antarctica. Gordon was a creative and dedicated scientist, who never forgot to pause and see the beauty in the environments where he worked and in the people with whom he worked. Gordon is sorely missed by his colleagues, his wife Fiona and sons Martin and Callum.

Gordon was born in Dundee, Scotland, a small city that is proud of its scientific heritage and its connection to the Antarctic. Scott’s ship The Discovery was built there and of course, Gordon grew up there. It’s a place to which he felt connected his whole life.

Gordon pursued undergraduate studies in Geography at the University of Aberdeen (which is also in Scotland) and earned his PhD at Cambridge (which is not in Scotland but was Norman for a while). He completed his PhD in 1992 and took up a Royal Society Postdoctoral Fellowship at the Norwegian Polar Institute. He moved on to a research associate position at the Ohio State University in 1994.

Gordon and I shared an office together in the basement of the Byrd Polar Research Center at Ohio State. We sat on opposite sides of a big open lab and we’d email each other just to make jokes and see the other person laugh. We were part of a great cohort that gathered around Ian Whillans to read papers, test ideas, and, I suppose, reasure each other that we knew what was going on. We weren’t all Ian’s students or postdocs, but we liked listening to each other.

Gordon moved on to Maine, where he climbed the academic ladder, mentored excellent students, and made important contributions to polar glaciology. His CV is a study in how to add new tools to your kit while maintaining focus on your own scientific priorities. He was interested in ice sheet mass balance, and approached this from an ice mechanics point of view. Not content with one hemisphere, Gordon worked in two. He observed ice sheets from space and he got up close and personal, using ice penetrating radar, GPS tracking of motion, and related measurements. He was the consumate field glaciologist.

Gordon was a surge-type glacier expert when he moved to Ohio State, but his view quickly expanded to include the ice sheets in Greenland and Antarctica as he picked up and flew, literally, with a new method for making precise point measurements of ice thickness change by comparing firn compation with vertical motion measured near the surface. He spent a lot of time with firn, thanks to all the cores he collected for that work, which makes the move into high frequency, ground based radar seem pretty obvious. He used radar to examine firn stratigraphy and surface mass balance; and then GPS and satellite remote sensing to examine where that ice was going and how its was chaning over time. His detailed measurements on East Greenland outlet glaciers produced important time series in environments that not only change year to year but day to day. His work on the ground helped validate new methods and opened new pathways to connect careful observation of surface processes with change at the glacier terminus. He knew how to get where he wanted to go and make the measurement he needed to make once he got there.

You would not be surprised to find that Gordon’s CV is also a study in how to be a good colleague. His partnerships spanned the globe. And the shear zone research he was conducting at the time of his accident connected right back to some of his earliest work at Ohio State.

My friend Derrick Lampkin wrote soon after the accident: “Gordon was the very best of us all…he was an exemplary scientist and a humble person. he […] made himself available […] to chat about science and was an advocate…more importantly he was filled with levity and good will”

Gordon died doing a job that we all think is important. He died doing something that he loved and for which he had an immense talent. I’m left with two irreconcilable thoughts about this. No, the end should not come this way, not at all. But what great fortune he had, to follow his passion and make the world a better place for it. Steve Price, another compatriate from Ohio State days, wrote “you visited amazing places, did amazing things, and had a positive impact on everyone you mentored and worked with.”

If we want to honor Gordon’s memory, we should strive to have the same kind of independence of spirit, honest humility, drive to provide meaningful answers to hard questions, and care for the communities in which we work.