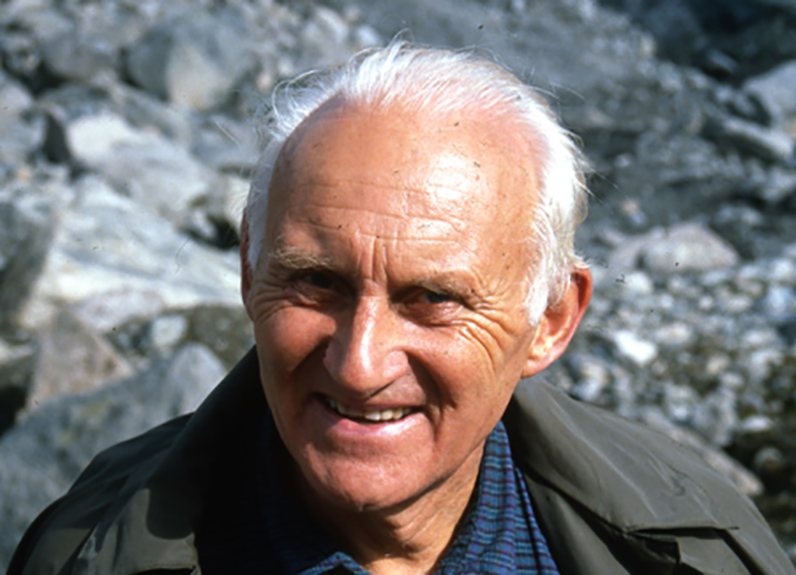 Gunnar was always fond of the outdoor life, understanding nature and technology. His studies at the University of Oslo were partly disrupted by the second world war; he studied chemistry, physics and physical geography for his bachelor degree. His particular interests were geological and geophysical processes related to glaciology. He took his master’s degree (Cand.real) at the University of Oslo in 1954.

Between his studies he lectured at various high schools in Oslo and participated in several minor expeditions to the Norwegian mountains and the island of Jan Mayen. In 1950, he moved to Sweden, teaching in high schools for several years. There he met his lifelong love, a Finnish girl Britta Byström, and they married in 1952. They had four children; Britta predeceased him by a year.

He developed a stronger connection to Sweden when he became an assistant professor in physical geography at Stockholm University in 1958. Here he earned his lower doctoral degree (Fil.lic) in 1961 and a full doctorate in 1965, on the origin of ice-cored moraines in Scandinavia.

In 1961, he was employed as a glaciologist with the Hydrology Department of the Norwegian Water Resources and Electricity Board (NVE). Large-scale hydropower developments were planned for several glacierized areas in Norway and there was an urgent need to get more knowledge as to how glaciers influenced the hydrology. Since these plans were a high Norwegian priority, special funding was made available within the Hydrology Department for a glacier section (Brekontoret). Gunnar set up a network of stations for measuring mass balance and movement at several glaciers, and runoff and sediment transport in glacier-fed rivers. Many of these stations were manned by students during the summer months. Some of the mass-balance series and sediment stations operate today and are among the longest series in the world. He was the first to map Norwegian glaciers at a large scale and subsequently published the first glacier atlas for southern Norway in 1969 and for northern Scandinavia in 1973.

But Scandinavia was not big enough for him so he took on several assignments for UNESCO and others in Turkey, Argentine, Chile, India and elsewhere. Yet it was in Canada he did most of his non-Scandinavian work.

At a chance meeting in Abisko with Dr Jack Ives, on the occasion of the 19th International Geographical Congress in 1960, he discussed the former’s plans for a glaciology program. At a subsequent meeting the following year, Jack, by then Assistant Director of the Geographical Branch, Canadian Department of Mines and Technical Surveys, offered Gunnar an opportunity to test his theory that the ice in the ice-cored moraines of the Barnes Ice Cap was also derived from seasonal snow. The Director, realizing this accomplished glaciologist would be a tremendous asset to the developing Canadian program, hired him as head of his new Glaciology Section.

The summer of 1962 was spent setting up a glacier-hydrology program on Lewis Glacier, a northern outlet of the Barnes Ice Cap, training students in field techniques, the use of the salt-dilution method for measuring the discharge of turbulent streams, and shipping 400 kg of Barnes Ice Cap moraine samples to Ottawa for analysis. He also wanted to ship a small quantity of ice samples south. Here his legendary love of ice cream came into play. Lacking the wherewithal to refrigerate his samples, he persuaded the chief steward on the flight south that the group would eat all the ice cream on board to free up space in the galley freezer for them. A somewhat similar approach gave him a conclusive victory in his Stockholm office challenge as to who could source ice cream from the greatest distance. Gunnar arrived with ice cream made by the chief cook at Fox 2 using Barnes Ice Cap ice! When he attended the Northern Hydrology Symposium in Saskatoon in 1990, he was honoured with an ice-cream cake from the local Dairy Queen.

In January 1965, Gunnar arrived in Ottawa with his family. He immediately began the process of selecting glaciers for Canada’s contribution to the International Hydrological Decade (IHD) network of representative basins. After map analysis and subsequent air-photo review, aided by Dr Stig Johnson, an initial 300 glaciers were reduced to 30 following air-photo examination. For the final selection, a helicopter was used to confirm the suitability of the sites selected. Detailed instructions on mass balance, glacier hydrology and camp construction were prepared by Gunnar and Dr Alan Stanley; a manual subsequently used by many national programs. Signature A-frame huts were built, with the assistance of Dr Wibjörn Karlén, at the chosen glaciers: Place and Sentinel in the Coast Mountains, Woolsey in the Columbia Mountains, Peyto and Ram River Glaciers in the Rockies, and Decade Glacier on Baffin Island. Later, in collaboration with Carleton University, Gunnar organized two-week training courses on glacier hydrology at Peyto Glacier in 1972, 1974 and 1978, and at Place Glacier in 1988. Dr Richie Williams, of the US Geological Survey, then aged 47, recalls taking the latter and learning about glaciological-measurement techniques in the field from two superb teachers, Gunnar and Nils Haakensen, that stood him in good stead in subsequent collaborations with Oddur Sigurðsson, Sigurður Þórarinsson and other Icelandic scientists. The two first met at the IGS Symposium on Glacier Mapping and Surveying held in Reykjavík where Gunnar, as editor of Annals 8, lived up to his well-earned reputation as a consummate professional, dedicated field glaciologist, with a strong yet amiable personality, and generous mentor to younger members of the profession.

In 1966, Gunnar arranged for special air-photo missions over the western Canadian mountains resulting in 1:10,000 scale maps of the IHD glaciers and information about the snowline that could be compared to his calculated glaciation levels. The map of Place Glacier was the first metric map ever produced by the Surveys and Mapping Branch. Later that year he returned to Norway, leaving an enduring legacy in Canada.

In addition to his job at the NVE, that at the University of Stockholm grew from a part-time job as associate professor, from 1966, and then full professor from 1981 at the Institutionen för naturgeografi. He gave up his duties at NVE, but still maintained an office there, commuting regularly between Oslo and Stockholm. He was editor of Geografiska Annaler, the Swedish scientific journal, for many years.

He understood early that satellites and remote sensing would be important tools in glaciology and became an active board member of the European Association for Remote Sensing Laboratories (EARSL). In this vein, he collaborated with Richie Williams and Jane Ferrigno on the Glaciers of Norway chapter in the Satellite Image Atlas of Glaciers of the World (1386-E; 1993). While visiting the United States for the final edit he had to undergo major heart surgery. Proximity to specialists, and a month recuperating in a local motel under the watchful eye of Britta, ensured his survival for another three decades as a teacher, mentor and husband

He was an enthusiastic, inspiring and creative leader, but also demanding. He was very efficient at obtaining funds for his studies, but dependent on good collaborators for much of the

fieldwork and for completing projects. His closest collaborators for many years were Randi Pytte Asvall (Norway’s first female glaciologist), Wibjörn Karlén, Nils Haakensen and Bjørn Wold (who took over his responsibilities as head of the Glacier office). Østrem’s global network was large and gave many younger Norwegians an introduction to the international glaciological world. After he retired, he continued to attend scientific meetings and inspired many students to work in glaciology.

In addition to his honorary membership of the IGS, he received wide recognition for his accomplishments, being awarded Sweden’s Royal Academy of Science J. A. Wahlberg silver medal, the Hans Egede medal of the Royal Danish Geographical Society and the Norwegian King’s gold Medal of Merit.

We are happy and proud to have had the opportunity to work with Gunnar and to have known him as a friend. He had a lifelong interest in glaciology and inspired many to join our scientific community and the International Glaciological Society.