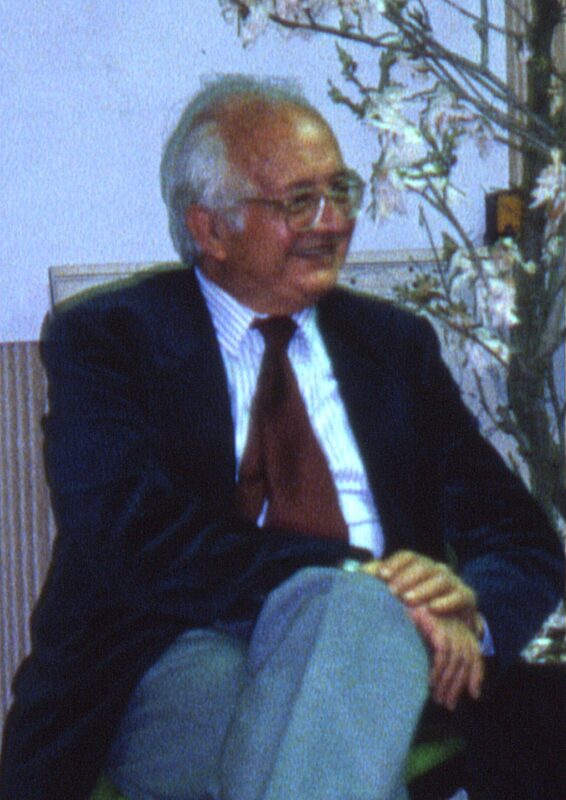 Louis Lliboutry died on 20 October 2007 in his home town of Corenc, near Grenoble, France.

He is born at Madrid and studied at Ecole Normale Supérieure from Paris. He got his “Doctorat d’Etat” in 1950 under the supervision of the L. Neel (Nobel Prize). The subject was on the modification of the metal magnetism due to shocks. At this time he was teaching assistant at Grenoble where he discovered alpinism and mountaineering ski.

Then he spent 5 years in Chile as a professor at the University of Santiago. As a scientific, he was a member of the successful French expedition at the Fitz Roy in 1953 (1). The first detailed topographic and geologic maps of the area were published from his own measurements and field observations and aerial photos. At that time he began to work on glaciers, understood the origin of  “penitents” (12), studied the development of rock glaciers in the dry Andes and wrote his first treatise of Glaciology in Spanish (2).

He came back in France in 1956 and became the director of the first Laboratory of Glaciology in 1958, which was at that time the “Laboratoire de l’Aiguille du Midi” located in the Alps at an elevation of 3500 m. This building is now the “Refuge des Cosmiques” where the LGGE maintained some measurements on atmospheric chemistry.

The laboratory will then be located at Grenoble downtown before moving on the University campus in 1984. He was the director of the lab during 25 years. He did many pioneering in glaciology including the basal sliding and the mass balance of temperate glaciers, the rheology of ice, the temperature profile in ice sheets.

He was a great theoretician but has also a unique sense of the field measurements (Chili, Groenland, Svalbard), and instigated many expeditions on Alpine glaciers. He created this spirit at LGGE where field or laboratory measurements were always conducted in parallel to more theoretical work. He published his famous “Traité de Glaciologie” in 1964 and 1965 (4) which remains a reference text book for glaciologists and students. He participated to the creation of the ANENA (Association Nationale pour l’Etude de la Neige et des Avalanches) in 1971 after a dramatic snow avalanche at Val d’Isere and was the President of its scientific and technical committee for many years.

His work was recognized with the award of the Seligman Crystal in 1993. Professor Lliboutry was an honorary member of the International Glaciological Society.

The glaciology was not his only field of research. His interest covered also the wider field of geophysics (5, 6, 7, 8, 9, 10) and he helps to create the Laboratoire de Géophysique Interne et Tectonophysique at Grenoble with G. Perrier. He was president of the European Geophysical Society during 2 years in 1976-1978. He was at the beginning of the teaching of geophysics at Grenoble (1959) which is now part of the Observatoire des Sciences de l’Univers. One of his most innovative contribution in geodynamics was, in 1972, the first estimation of the tectonic plates movement based on the No Net Rotation concept (11).

With him, we loose an enthusiastic and truly outstanding glaciologist. We would like to express our sympathy to his wife Claude, his two children and all his friends around the world.

On behalf of the LGGE members,
Michel Fily, Director LGGE

And more than 150 articles…