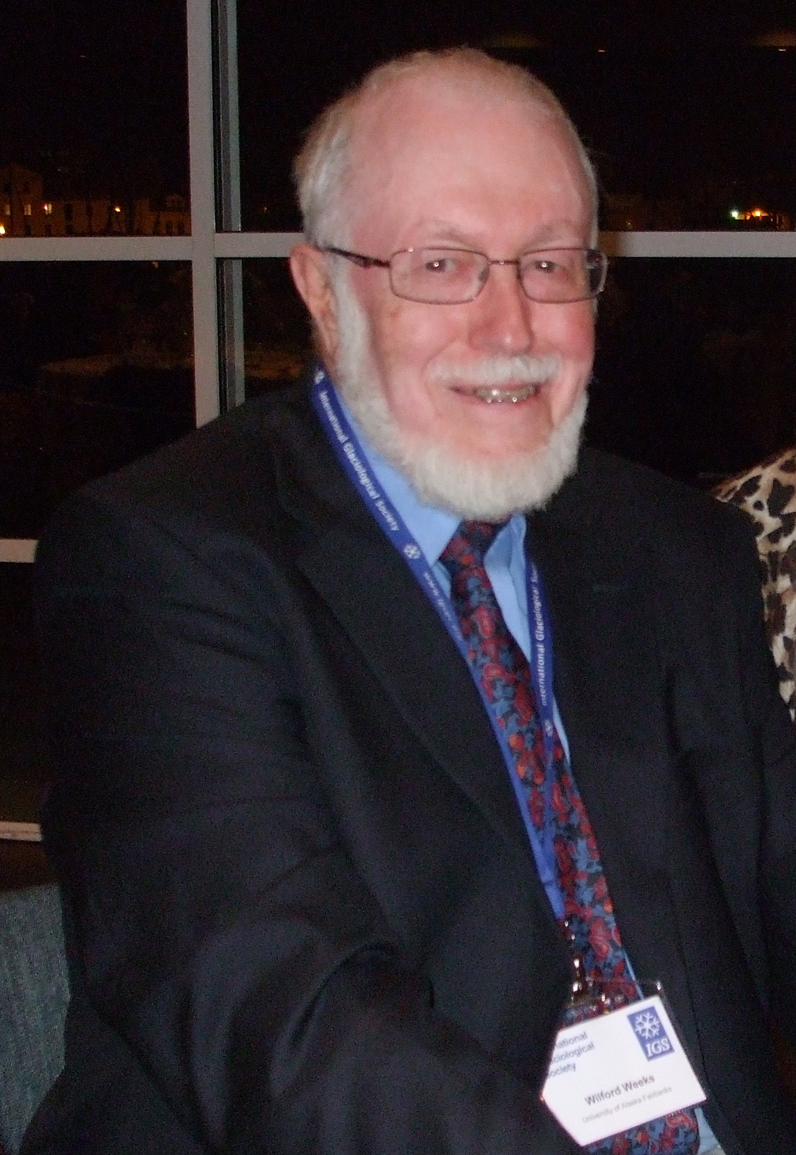 Willy Weeks, a long time member of the IGS, a former IGS President and a Seligman crystal recipient died at the age of 88

On a cold February day in Portland likely reminiscent of the Arctic longtime IGS member and former President and Seligman Crystal recipient Willy Weeks passed from this Earthly realm. Two Zen like quotes from the Phase Transition section of his book on Arctic Sea Ice (University of Alaska Press) immediately come to mind. “If you don’t know where you are going you may end up somewhere else” and “Wherever you go there you are”.

Coming from the Midwestern United States Willy Weeks’ path to making the study of Sea Ice a respected disciplinary component of the venerable International Glaciological Society was not at all direct. His undergraduate education was at one of the great Midwestern Big 10 State Universities, the University of Illinois along with ~40K other students. While they have transitioned somewhat these Universities were inexpensive and designed to provide education at low cost to anyone with the will (and perhaps more important, the essential curiosity) to learn and self discipline to negotiate the overwhelming size and diversity of choices. These were essential skills Willy either naturally had or developed.

Perhaps because of Illinois or perhaps because of growing up in the Midwestern United States Willy was unusually endowed with common Sense and humility particularly notable in today’s world. These and other characteristics enabled him to move from relatively humble origins to practically remaking the IGS in terms of Sea Ice. Being a life time Bass Player in both Orchestras and Rock Bands he wasn’t too bad at partying either.

After surviving the University of Illinois with flying colours, Willy then moved north to Illinois’ answer to the Ivy League, the University of Chicago where he got his PhD in the somewhat obscure Geology discipline Geomorphology. I do remember Willy saying his advisor told him that he better study this subject because he was interested in it, since the likelihood of getting a job in this particular area was very low.

With this elite background Willy took a shot at classic academia by taking a faculty position at Washington University a smaller private University of high reputation in St Louis Missouri. Fortunately for the IGS Willy didn’t quite fit there and didn’t make tenure. (Better send a thank you note to Wash. U). For some this might have stalled their career, but not Willy Weeks. He licked his wounds, set out on life’s adventure and never looked back. ‘Wherever you go there you are”.

After a stint I believe with the USGS (Willy pretty much walked all over the White Mountains doing something out there) the irrepressible W Weeks ended up at the Cold Regions Lab in Hanover NH where I first encountered him. When I arrived there in the Fall of 1970 it was Rock and Roll Time. Having gone on the Exon Super Icebreaker as an ice scientist on a cruise through the Arctic in previous years Willy had teamed up with his long time Partner in Sea Ice Crime (oops I mean sea ice physical properties and thermodynamics) Norbert Untersteiner (an Austrian survivor of being drafted into the wrong side of WWII and whose ashes are currently in the Arctic Ocean) to help out putting together an ambitious program to study the Dynamics of the Arctic Pack Ice : AIDJEX. Interest in the Arctic was heating up because of North slope oil and the Cold War was still on. As everywhere, but especially in the US, Science runs on Money Private and Public and you have to be quick to get your bid in when the opportunity hits.

Putting together a diverse (but capable and some with pack ice experience) group of Arctic Scientists to measure pack ice motion and deformation as well as sample sea ice itself by drilling holes cores and occasionally falling thru leads on snowmobiles and scrambling out we joined a group of eclectic Oceanographers from the Navy and UW on an Ice Flow camp In the 1971 AIDJEX pilot study. Who does this stuff—well Glaciologists of course. Who knew Science could be fun, demanding, interesting and exciting all at the same time. It was my first exposure to the Glaciological Society and diverse Wild Polar Scientists. I was hooked.

One Anecdotal note says a lot about Willy. We were sharing a cook shack with a Military Oceanographic group I believe from NRL. I can’t remember the details but they were running a tight military operation with food at certain times. In one humorous incident their chief who was a good guy but liked very organized schedules came over and talked to Willy, our nominal leader, and requested that we eat at only certain hours: our catch as catch can schedule was messing up his team’s schedule. (Can’t remember if he also complained about us getting the Great Eskimo cook drunk one night by sharing drinks wiping out all food for a day but maybe.) Willy told us he replied that he would tell us but his group of Scientists took orders from him ranging from very poorly to not at all! A typical Weeksian response.

Really great to have a mentor Scientist with a sense of Humour and exuberance for life and an appreciation for diverse views and opinions—rare in today’s world but certainly not rare in a well organized IGS symposium. For those that haven’t experienced these symposia I highly recommend it; you won’t be sorry.

For the record the AIDJEX program was one of the first programs to fully integrate Women into the previously almost all male Pack Ice field programs without making a big deal of it. Norbert and probably Willy for example just told the graduate students (say two men one woman or vice versa) at remote satellite camps to go out there and get good data and take responsible care of your personal life. They did, sent the data back in, and didn’t complain about living conditions—ah the good old days. Real equality.

In terms of the rough and tumble of Scientific Reviewing and publishing I was once having trouble reviewing a paper and asked Willy—seemed like there were big errors. Willy’s response was well do what you can to point out problems errors and misstatements and but let them publish it. At the end of the day they will have to be responsible for their nonsensical publications not you – you did what you could. For those of you aware of the infamous Fallacious ‘Hockey Stick Paper” purported to prove the climate is warming you can see he was dead on. A bad paper can ruin your reputation. A good thing to have in your head at both ends of the review process.

As for field work a totally different kind of leadership you might expect from an Accomplished Scientist of high stature. In 1972 we would be sharing a small prefab wooden hut on the pack. Willy would take any bunk which no one wanted and on round the clock manning of laser sea ice deformation measurements whatever measurement period no one else wanted.—not a prima donna. He certainly walked the walk, didn’t just talk the talk and was very good at defusing tense scientific standoffs—who is right is not the issue; what is the correct physics is.

That’s of course but a sketch from a productive life that has a positive influence on a lot of us and without which many of us would not have had a significant Scientific career. I could certainly come up with many more anecdotes and I recommend you page thru Willy’s Sea Ice Text just to read all the literary and obscure quotes. Great fun! What was Willy’s Weltanschauung—hard to say. There are no Ice Streams or anything like that named after him, but I doubt that he would be worried about it. As an old Arctic Navy Hand from the military spy days once told me—Yes everyone in the Naval Arctic Community knew Willy Weeks and he had left a trail thru the Arctic Sea Ice Community a mile wide. Indeed he did at many levels. The detailed significance: I don’t know but it was certainly a mile wide that I can attest to! He will be missed but not forgotten, especially in the IGS community.